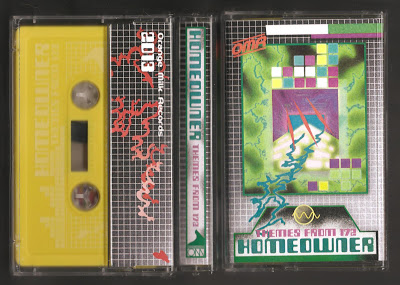 Homeowner is the solo guise of Joe Bastardo who also plays in the duo Looks Realistic and the jam/drone trio of Gay Shapes.  But let’s not forget his solo outings as Bastian Void which has had great releases the past few years.  Joe is real busy.
This Homeowner release we are lead into electronic havoc unlike the simple melodies of Looks Realistic and the pulsating live drones of Gay Shapes.  It reminds me of early M. Geddes Gengras releases (process wise) where the form is built with layer upon layer and the overall shapes that rise to the surface come from the interaction of all the elements.  But Homeowner does something very different than allowing it to be very busy, instead the spacing and layering feel really deliberate and composed rather than set to auto pilot.  It is as if Milton Babbit had composed “Occasional Variations” with better technology and a little Ritalin.
Speaking of Milton Babbit those older dudes were doing electronic music from no point of reference. They had no cultural hang-ups and neither does Homeowner.  There are points of reference hinting to technological sources but it never surfaces in the sounds.  Also the whole tape almost leans towards IDM at points but never goes there allowing for a fresh improvised feel that is actually well thought out.
My personal favorite elements are the samples.  There are small signals to a human hand involved along with the sounds of other instruments.  I love musique concrete and so would love to hear more play with tape in future releases.  Also I love tapes you get lost in, I honestly could not tell you which side I was listening to but it is not repetitive.  Its overall sound is of something with mass and takes up space. Over all this is a great work for the post-noise electro acoustic revival.  Also Orange Milk is one of those labels that really have their design down tight.  The aesthetic gives a proto-Nintendo climax without being nostalgic; design worth the moolah.

This is the beggining of an idea I have had for quite some time.  Deejaying for a free form show you come across unlikely artifacts of our audible history.  There was once a time, about a year and a half ago, when I thought I knew what I enjoyed about the underbelly of sound.  I soon realized not only is there way more than I ever imagined but also my preferences were definetly mallible.  When deejaying you dont really have the time to say what you think.  You can slip it in here and there but you really dont get to talk about a great album or an album that is popular but you think sucks for some reason or another.  So this blog will fill that void for me while hopefully unearthing some great albums for review.
That said I also felt there was a void of review sites.  There are some great ones and they do point me to great sources for tapes but there is a leaning towards prose rather than criticism.  When I say criticism I mean constructive criticism.  I know critics in the past have mostly been wankers but I dont see anyone really making connections or trying to see where styles and forms fit.  I have only seen fanfare.
The debate of art and fashion has always been a topic for me and my friends have always assured me fashion and art are one and the same thing.  But once deejaying I found way more to listen to than my prefered escape into the dark recesses, along creep street and right into lonerville.  I found albums at one point I would have never worn.  For one it was my narrow view and also the aesthetic did not fit but there were many albums deserved a better look.  So I am hopefully going to find some artists of old to for you readers.
I am going to make spelling mistakes and I might even invent some words.  With that out of the way we can start.
Posted by Ayurvedic Tapes at 1:32 PM No comments:

Ayurvedic Tapes
Worcester, MA based noise lover and deejay for WCUW 91.3 FM Music Under The Moon. Inspired by musique concrete, early electronic bounce and old school noise. If you would like to see your material reviewed here email me at non.acumen.and.associates@gmail.com. NO REQUIREMENT FOR FORMAT BUT I WOULD LIKE TO SEE PHYSICAL RELEASES.